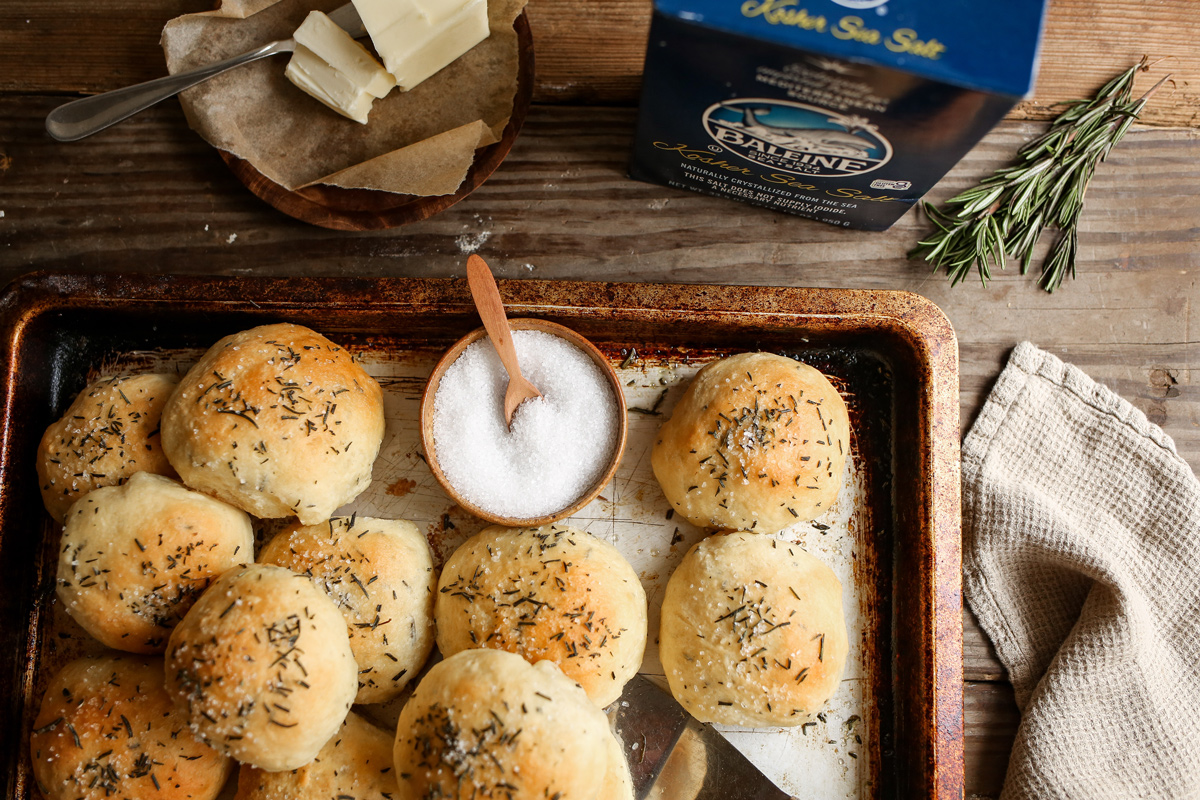 In a small saucepan, melt the butter with the rosemary sprigs. Once melted, remove the pan from the heat, but keep the rosemary in, and allow the butter to cool completely. Once you’re ready to use the butter, you can discard the rosemary.

Meanwhile, in the bowl of a stand mixer, add the sugar, warm water and yeast and whisk to combine. Let sit for about 10 minutes to allow the yeast to bloom.
Once the yeast has bloomed, add in the eggs and beat on medium speed to combine. Then add in half the butter. Mix until combined.

Add the flour, La Baleine Kosher Sea Salt and 2 tablespoons of the chopped rosemary. Then beat on medium speed until just combined, being sure not to overmix.

Gather the dough in a ball and remove from the bowl. Then lightly oil the bowl and place the ball of dough back in. Alternatively, you can use a separate new bowl for this step if you prefer. Cover the bowl with a clean kitchen towel and place in a warm spot to rise for about 1 hour.

Once the dough has risen, turn it out onto a lightly floured surface. Gently knead it a few times before shaping it into a roughly 12-inch rope. Cut that in half and then cut each half into 6 equal pieces.
Roll the dough pieces into balls and place them evenly spaced apart on a well-greased 9x13 sheet pan
Loosely cover the tray with the clean kitchen towel and place in a warm spot to rise for 30-40 minutes, or until the rolls are about doubled in size (it’s ok/normal for the rolls to be touching each other).
Preheat the oven to 350 degrees.

Brush the rolls with the remaining butter. Sprinkle with the other 2 tablespoons of chopped rosemary and a generous sprinkle of La Baleine Kosher Salt (the Fleur de Sel would also work well here).
Bake on the middle rack for 15 to 18 minutes, rotating the pan halfway to ensure even browning, until the rolls are just starting to turn golden brown. Remove from the oven and place the pan on a baking rack and allow to cool for a few minutes before serving.